The Return of Gunbound

When I got the Press Release document for the re-launch of Gunbound, I got very excited. It’s one of the earliest online computer games I’ve played, along with Ragnarok Online.
The concept of Gunbound can probably be traced to that old computer game called Scorched Earth – wherein tanks try to eliminate opponent using different type of missiles that has different attributes. Same goes to Gunbound – you control a single tank and try to eliminate other tanks but using different missiles with different capabilities. It was first released on the PC platform.
Since most PC Games got relaunched as a mobile version (starting with Ragnarok Online Mobile, Grand Chase, etc) it’s no surprised that the popular Gunbound is now coming back as a mobile game.
Here’s what we can expect from the latest reincarnation of Gunbound: 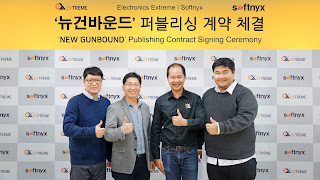 at 6:27:00 PM
Email ThisBlogThis!Share to TwitterShare to FacebookShare to Pinterest
Labels: Mobile Games