Will Evil Geniuses Be The International 2018 TI8 Champion?

I am hoping so. I am rooting for Evil Geniuses to be the Champion of this year’s DotA 2 The International TI8. 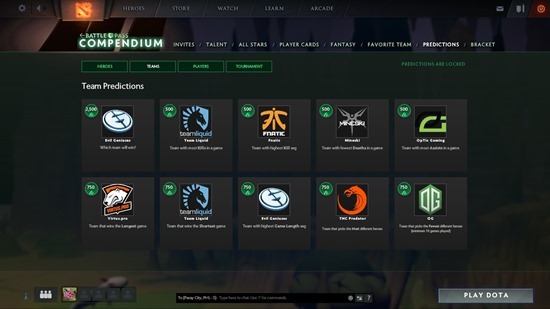 I can't believe that The International (TI) tournament of DotA 2 has been around since 2013. I guess "I'd rather play the game than watch the tournament" was my motto the past few days. This changed last year when I returned to playing DotA 2. Team Liquid was the champion of TI7 last year and I've been a Twitter follower of their account since. This year, I'm hoping that Evil Geniuses would be the TI8 champion. I've seen some of their games and I'm amazed at their team work.

Both Team Liquid and Evil Geniuses are in the upper bracket of the on-going TI8 tournament, which will culminate on Friday August 24, 2018. It's currently being held in Vancouver, Canada and you can watch the live games via the game client itself or Twitch. There are some Pinoy players in the other teams competing like TNC Predators and Mineski but both teams got eliminated early. They would still get a hefty amount as consolation prize from the current total prize pool of more than $24.8 million. This year, Valve (the maker of DotA 2) is aiming for a $30M total prize pool which is almost $6M more than the $24.78M total prize pool last year (TI7). 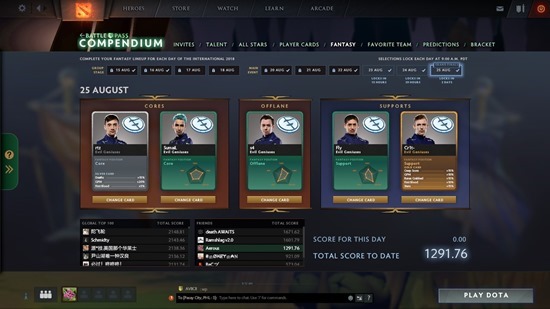 Being a 2018 Battle Pass and DotA Plus subscriber (premium service) I have access to several predictions "contest" during this year's TI8. Some of the awards that subscribers and DotA 2 enthusiasts are asked to predict are the champion for TI8 (I selected Evil Geniuses), the MVP (I selected Miracle of Team Liquid), the highest Golds-Per-Minute (GPM), the most banned hero (I selected Phantom Assasin), etc. There are A LOT of awards being predicted due to DotA 2's several statistics (stats) available. In fact, if you watch the matches during TI8, the broadcasters (casters) will include their analysis of the team including the GPM, Kills, etc.

There's also an option to create a Fantasy Team in the Compendum, which is to predict and to collect the cards of all TI8 players. Each card contains the picture of the player, in-game name, the stats (farmer, support, killer), the lane position (safe lane, offlane), the team they represent (like Virtus.Pro, Newbee, etc). I've collected all the player cards except two players from Pain Gaming. There are emerald (green) version of the cards and Gold version. I don't know the difference between Emerald and Gold or what the amount is used for, but so far, I have $1,000+ in the Fantasy Team tab.

Emerald (green) is the color for The International (TI) 8 and it's used extensively in the new avatars/skins and items released during this season. There are Treasures I, II and III containing different items for the Heroes in-game and Treasure III are more valuable. I probably got 12 Treasure I, 12 Treasure II, and 6 Treasure III items at my current Battle Pass level 278 but I haven't got an Ultra Rare (and even Cosmically Rare) item yet. To reach 278, I have to shell out P500 for the initial Battle Pass ticket, another P1,300 for a sale of levels and finally, another P500 for additional levels. Out of 278 levels, I probably just level-up (through grinding or playing the matches) around 38 levels only. I have a lot of losing streaks.

Aside from hoping Evil Geniuses to win this year's TI8, I'm also hoping that they'll use my favorite character of all time -- Ogre Magi. There are very few videos from recent TI matches that used Ogre Magi (support) and it will be awesome to see him in the coming matches. Ogre Magi is not a popular pick for a line-up in a match this huge. So far I've seen a lot of Weaver, Wraigth King, Dark Willow, Vengeful Spirit, Tiny, Invoker, Storm Spirit, etc.

Who are you rooting for to be this year's TI8 Champion?

So Evil Geniuses (North America) didn't win the TI8 Championship. It was the European team OG who took home the Aegis of Immortality trophy. I watched the finals game and OG did a comeback on their 5th and final game. The 2nd Place winner, PSG.LGD (China) were also a great team. Evil Geniuses (EG) ends up being 3rd Place while last year's TI7 Champion, Team

Liquid, finished 4th Place. After the match, I've began to watch videos explaining the history of each and every participant of TI8.

I don't know why I'm not into watching The International (TI) DotA 2 tournaments before, but now, I'm looking forward to watching #TI9 next year as well as the other Major matches. The gameplay at The International is really beyond what we normally experience. TI matches were always coordinated and a team effort. It's not all about killing but really aiming for destroying the Ancient -- winning the match. I realized how toxic it is at the South East Asia (SEA) Region where I'm playing. That's the reason why we're called Peenoise (Pinoys) -- we have a lot of cancer/toxic gamers and we're very "noisy" in-game aka trashtalker.

DotA 2 is really a cooperative game and there are really roles that each player is assigned to -- normally 2 carry, 2 supports and 1 offlane. In my experience at the SEA Region, everyone wants to be carry and to kill, kill and kill competitors. Most of my games at SEA are muted because the players are mostly noisy, trash talker and doesn't know how to use a mic (it's mostly ON all the time and you could hear even the breathing of the player). In the matches of the TI8 teams, the supports would really protect their carry at all times even taking the death blow just to make sure that their carry will be unstoppable at late game.

Watching the pro players play the game, made me realized how far they are in mastering the game (very far) and how fast they play with all the potions and scrolls they purchase. They are very good at planning/strategy during the drafting (selection of heroes) to be able to come out with heroes that best compliments each other. Aside from mastering a lot of heroes, these pro DotA 2 players already have "signature heroes" -- DotA 2 heroes that is played (very well) buy the pro players that they became the faces of these heroes.

Congratulations again to OG for winning TI8 and looking forward to seeing them again next year for The International TI9 DotA2 Championship.