There’s a new DotA2 Hero! It was revealed today during the update. His name is Grimstroke and he reminds me of Monkey King. Will do some Hero Demo in a few minutes.

This is in time for the conclusion of this years The International TI8 Finals in Vancouver, Canada. I’m still hoping Evil Geniuses will win. 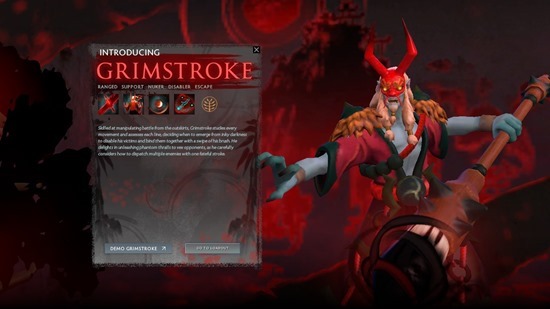 1st Skill: Stroke of Fate
Ability: Point Target
Damage Type: Magical
Pierces Spell Immunity: No
Grimstroke paints a patch of ink with his brush, damaging and slowing enemies. The damage is increased with each enemy the ink hits.
2nd Skill: Phamtom’s Embrace
Ability: Unit Target
Affects: Enemy Units
Damage Type: Magical
Pierces Spell Immunity: No
Dispellable: Cannot be dispelled
Summons a phantom that moves quickly towards the target, latching to it when she arrives. Once latched, the phantom damages and silences. If she survives the full latch duration she rends her victim for heavy damage and refreshes Phantom’s Embrace’s cooldown.
3rd Skill: Ink Swell
Ability: Unit Target
Affects: Allied Units
Damage Type: Magical
Grimstroke shrouds an allied unit in ink, increasing its movement speed while silencing it and making it immune to attacks. Enemies in range of the allied unit are damaged with inky tendrills over time. After 3 seconds it triggers, applying damage and stun in an area around the unit in proportion to how much ink tendrill damage was inflicted across the duration.
Ultimate (SS): Soulbind
Ability: Unit Target
Affects: Enemy Heroes
Damage Type: Magical
Pierces Spell Immunity: Yes
Dispellable: Cannot be dispelled
Binds a targeted enemy hero to its nearest allied hero within the bind radius, preventing both from moving away from each other. Any unit-targeted spell that either bound hero receives also gets cast on the other hero. If the bind is broken before the duration expires, the initial target will be bound to its nearest allied hero in the radius.
Skill Tree
Level 10 -- +90 Gold/Min or +30 Movement Speed
Level 15 -- +125 Cast Range or +12% Spell Amplification
Level 20 -- +2 Hits to Kill Phantom or +600 Stroke of Fate Cast Range
Level 25 -- +50% Stroke of Fate Damage or +200 Ink Swell Radius
BuzzNet Tags: Grimstroke,DotA2
at 8:42:00 PM
Email ThisBlogThis!Share to TwitterShare to FacebookShare to Pinterest
Labels: DotA 2