13 Reasons Why You Should Play Ragnarok Online

During the Q&A Session at the Marco Polo Hotel for the Press Conference of Ragnarok Online Philippines, one of members of media asked the Managing Director of Electronics Extreme, Kamphee “Ken” Piromward, how will Free-to-Play (F2P) business model survive (in this age of mobile gaming and heavy-graphics online games)?

Ken Piromward simply asked “Why are you (still) here?” (at the press conference). He said that at the end of the day, we would “want to come back home”. I totally agree. Ragnarok is home. We’re at home with Ragnarok. That’s the reason why Electronics Extreme is very confident that Ragnarok Online Philippines would (again) be a hit in the Philippines because we love the game so far. They already proved it in Thailand and other countries like Taiwan and Indonesia. Here in the Philippines, it still has a large followers. 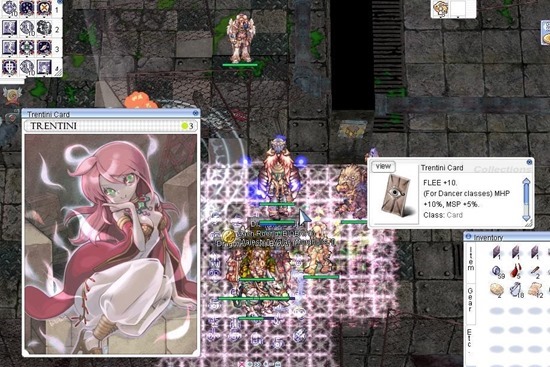 When Ragnarok Online Philippines held the Ragna Festival 2017 at SM City Annex, it was jam-packed with people. Philippine Ragnarok Online (pRO) never died when it closed the server in March 2015. It just took a break from the dissatisfaction that we experienced with the old publisher.

It was again proven by members of the media, bloggers, Guild Masters, and RO enthusiasts present to cover the announcement at the Marco Polo Hotel. You can also visit the Facebook page of Ragnarok Online Philippines to know how many old-time RO players are excited to come back home.

For those who were too young to play Ragnarok Online during it’s heyday, and for those elementary and high school kids these days who are hook up to DotA2, LOL, Clash of Clans, Mobile Legends, and Pokemon, what will make them try Ragnarok Online? I can think of 13 reasons why they should play RO:

The ultimate goal of defending and conquering these different agits is for the ingredients to make the ultimate weapons and gears in the game – the Godly Items (Mjolnir, Sleipnir, etc). 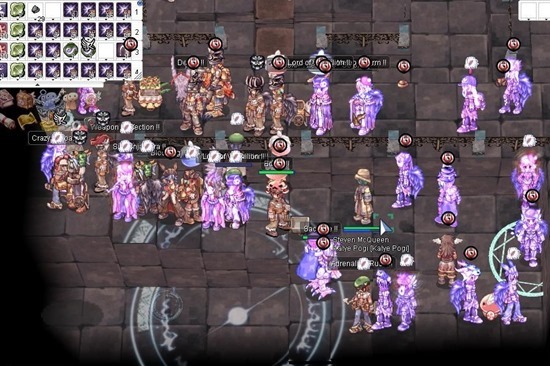 The avatar (costumes) of each job classes may be the same, but the headgears you’re wearing could be your signature online.

There’s also the Expanded Class – Super Novices, Rebellion (from Gunslinger), Kagerou and Oboro (from Ninja) and the Doram Race. Each job probably has 2 or more builds, based on stats and weapons being used. A priest can be full-support (INT-VIT), battle (STR-AGi) or ME (Magnus Exorcismus, a skill) based on INT-DEX. A Hunter can be a Double-Strafer (skill) based on DEX or a Falconer (AGI-LUK).

Imagine how many character builds you can make from the combination of the 6 attributes STR (strength), AGI (agility), VIT (vitality), INT (intelligence), DEX (dexterity), and LUK (luck). Not to mention that there are a lot of skills where you can build a character. The possibilities are endless.

With the release of the Doram Race (cat-like citizens from Lasagna map), Ragnarok Online is swarming with anime-style, cute characters – including the Expanded Class Soul Linkers, Taekwon Masters, Gunslingers and Ninja.

What makes the characters of Ragnarok Online appear as anime or manga characters is the availability of a wide variety of hair styles and colors. You can have green or violet hair in-game. 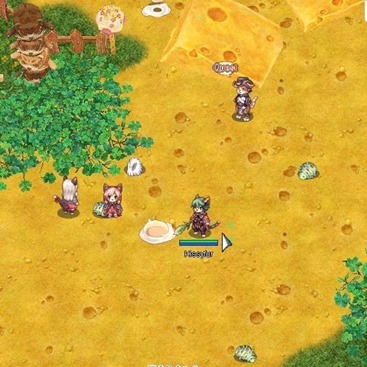 Endless Tower (ET) is a 100-floor, smaller area dungeon, containing most of the Boss (MVP) monsters in-game as well as the normal monsters. The more players in a party (group), the better chances of survival.

There are also quests and instance dungeons that a player could try like the Nightmare Toy Factory, Old Glast Heim, etc.

Battlegrounds are similar to DotA – it could be Tierra Gorge (6 vs 6 players), Flavian (4 vs 4) or KVM (3 vs 3). Before, during the early release of Battlegrounds, it’s 20 vs 20. These battlegrounds could let you earn medals which you can exchange for unique equipment and gears.

Before, we use a 3rd party program to record our sieges and PVPs. Now, recording feature is build in-game. Recently, when Episode 16.1 was released in the International Ragnarok Online (iRO server), Achievement System was incorporated in-game (similar to most mobile games today). Ragnarok is still evolving and developing new features for the game. 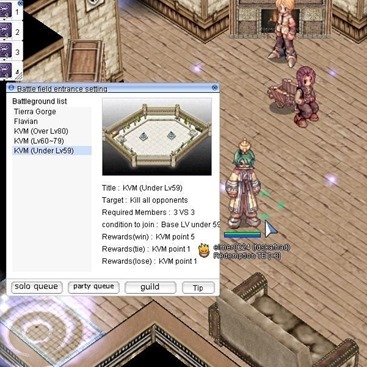 The earliest cards that a new Ragnarok player could get will most likely be a Poring Card, a Lunatic Card or a Fabre Card (VIT+1). One thing I like about these cards is the graphics/illustrations of the monster that drops it. 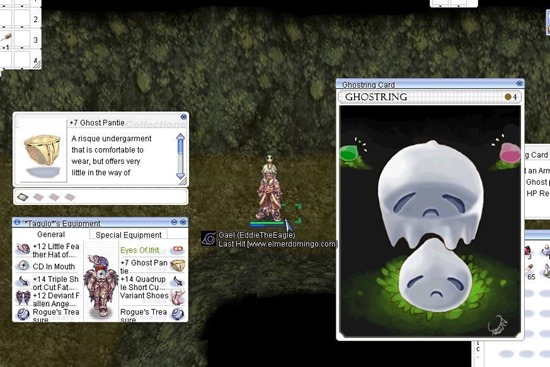 Most of these Boss monsters require a party to kill. The player who makes the most damage to a Boss monster becomes the MVP (an MVP pops up on top of the head once the Boss is killed). Boss Hunting gives extra experience but on most cases, it’s death to the players. If you’re super lucky, you could get an MVP Card which is the rarest thing in-game. 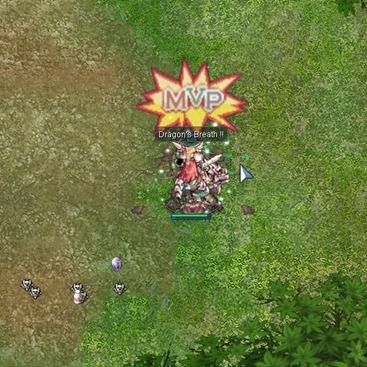 I believe if you’re a kid these days that are used to heavy graphics, you’ll find comfort in Ragnarok Online. Most games nowadays contain a lot of information (character names, HP and SP on everyone on screen) and uses very vivid colors. In Ragnarok Online, the only HP/SP bar you’ll see is your own (blue for SP, green for HP). The names of the characters in your screen will only be seen if you hover your mouse on the other character. It makes the graphics of RO simpler and less messy/clutter.

The Original Soundtrack (OST) of Ragnarok Online (“Memories of Ragnarok”) is available in the market before. It contains most of the BGM you’ll hear in-game. I actually have it in my iTunes and it’s very good as sound trip music. Ragnarok Background Music have been played by live bands during real-life events and YouTube has a lot of videos of musician’s playing the songs from Ragnarok Online. 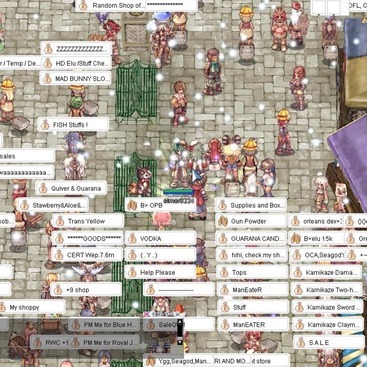 Most players create a merchant character to vend or buy items. The Ragnarok Market is vast because of this selling/buying. Stronger characters can hunt stronger monsters that drop rare item (like headgears, cards or armors) while some novices and First Jobs can hunt monsters for beginners that drops decent cards (like Pupa).

If you don’t have a merchant, you can still sell and buy items by using the in-game pub feature. You can create a pub (public or private chat) that let’s up to 20 players enter that pub to talk to you about the item you’re selling and buying.

These 13 things/reasons are the first things that came to my mind when thinking of things to promote the game to newbie players. I’m pretty sure I missed a lot more features of RO but most online games these games have features that we’ve already seen in RO.

Ragnarok Online is actually not in competition with mobile games or those heavy-graphics online games. Ragnarok is simple, unique, old-school and has a deep story. It’s probably these 13 reasons/features that will make a gamer today try Ragnarok Online.

What are your reasons in playing Ragnarok Online? 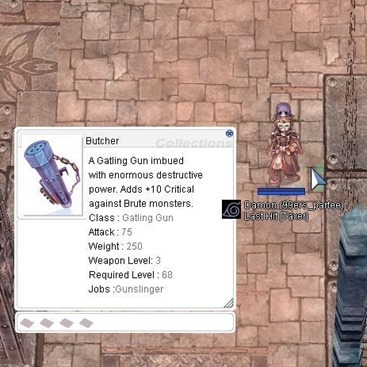 Damon my new Rebellion doing the quest for the Butcher [1] 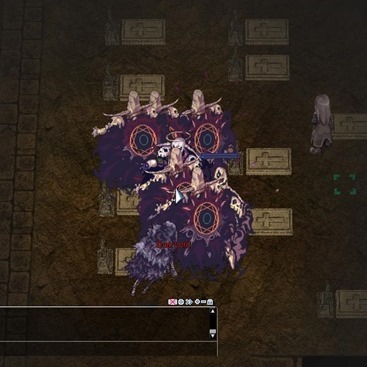 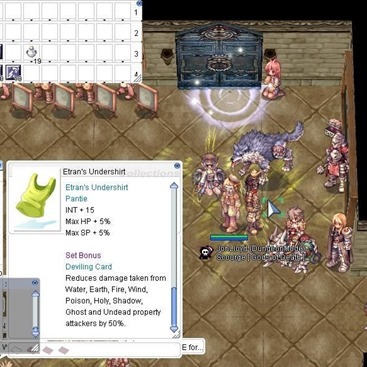 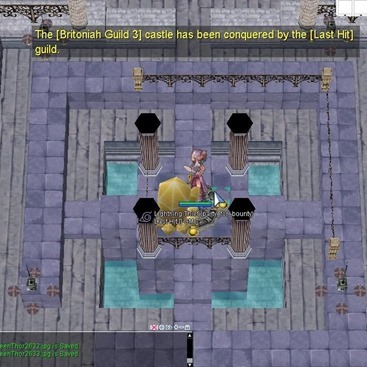 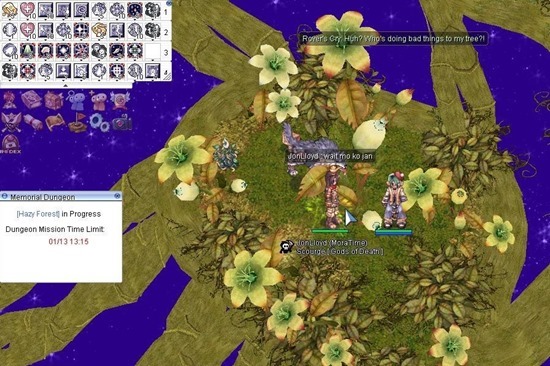 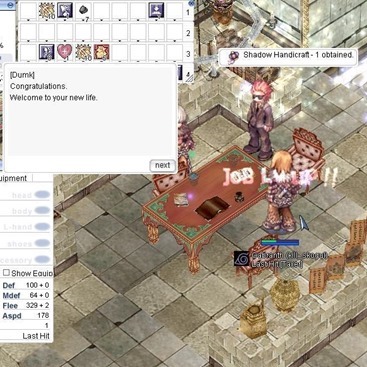 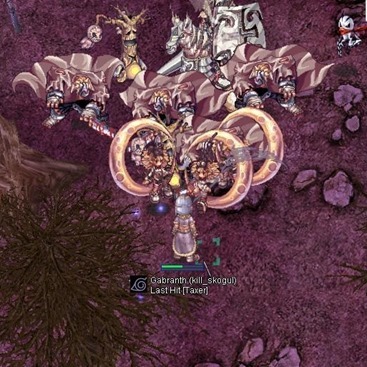 Facing Lord of Death in Niffelheim 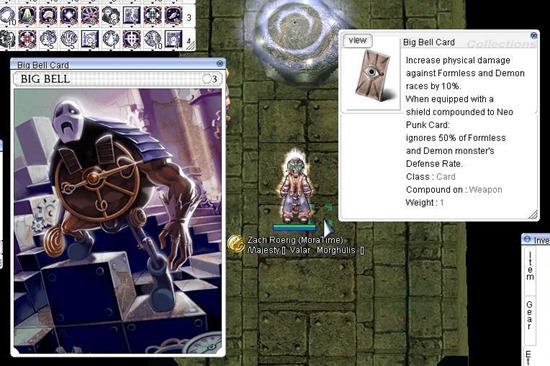 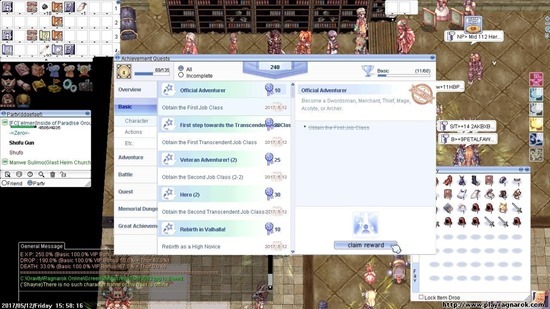 The Achievement System came with Episode 16.1 in iRO 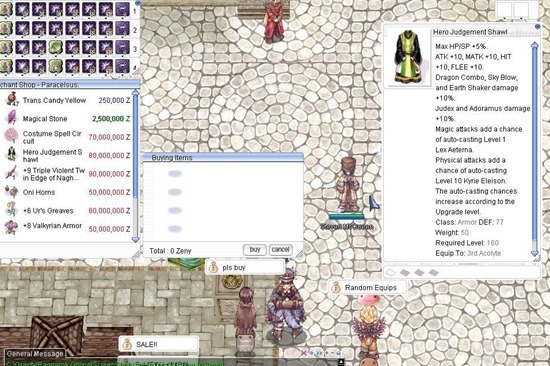 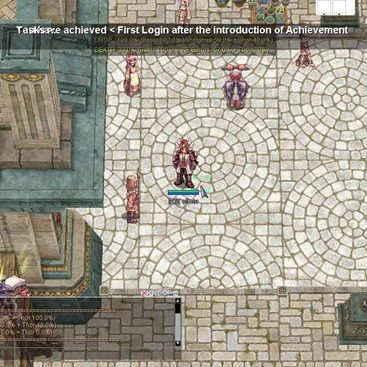 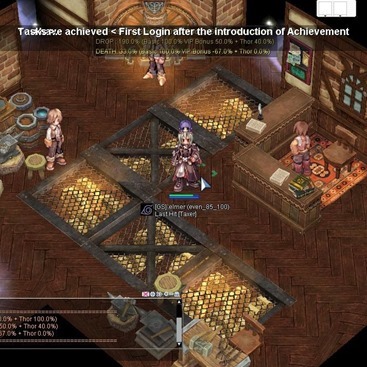 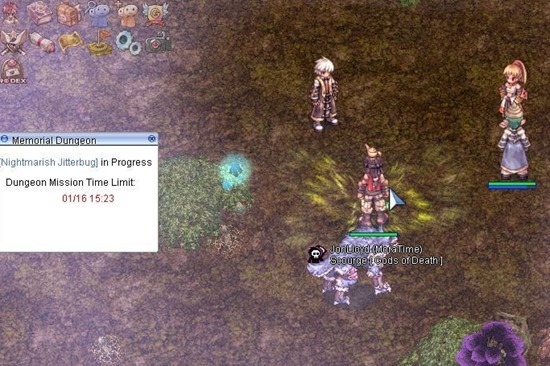 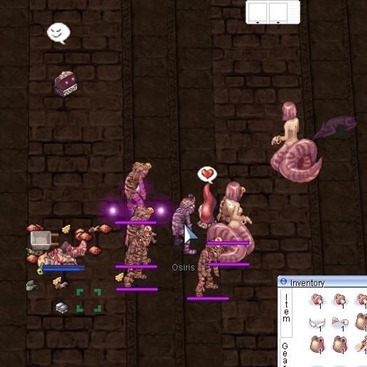 Osiris (Boss) and his minions of Isis and Ancient Mummies

Yes… the Pope in Ragnarok Online is a female. This and other things you’ll learn by doing quests 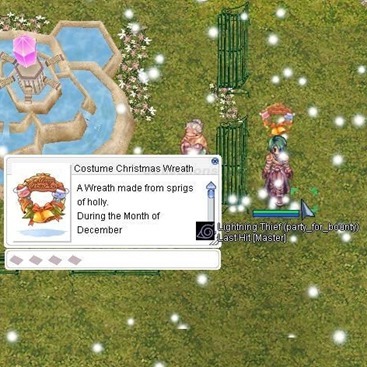 The Christmas Wreath Costume I did last December 2016. A lot of good headgears in-game can only be obtain by doing limited-edition headgear quests 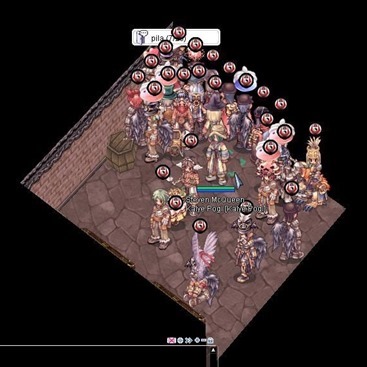 After siege, comes the salary. My soul linker Steven McQueen getting his salary from papski of Kalye Pogi, the WoE TE division of Hobbits. Hobbits is my first guild in iRO 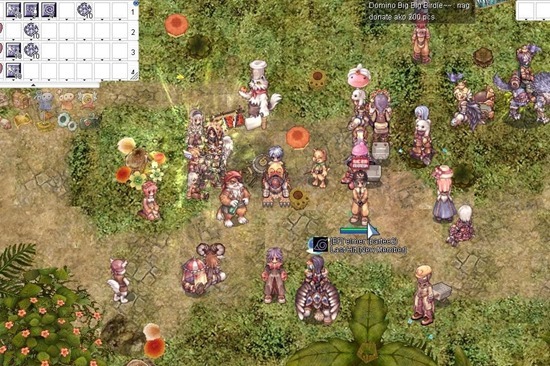 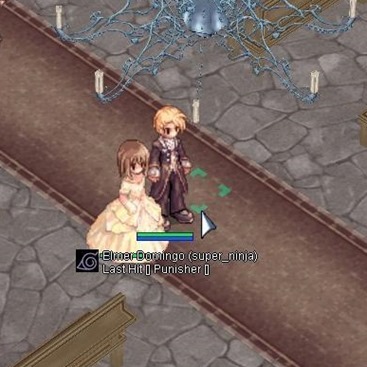 Wedding System – one of the many features of Ragnarok Online 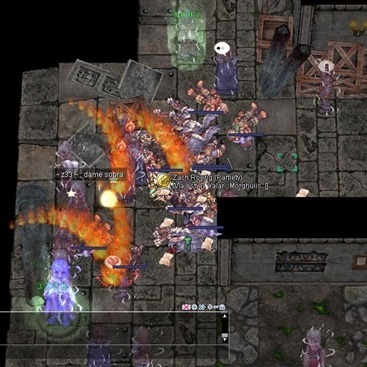