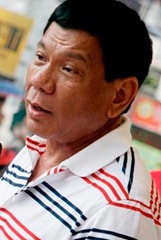 Now that Davao City Mayor Rodrigo Duterte is clearly the winner of the recent presidential elections, I tried to review the things that he mentioned during the series of presidential debates.

This list is not complete of course but here are some of the things that I remember he mentioned. I’ll try to review the 3 presidential debates and update this list. Hopefully, after his term in 2022, all these expectations and promises will be met:

Do you remember something else that he mentioned/promise from the Presidential Debates? Please post it on the comments below.

Technorati Tags: Expectations from President Duterte,P-Gong,Digong,Rody Duterte
at 7:14:00 AM
Email ThisBlogThis!Share to TwitterShare to FacebookShare to Pinterest
Labels: Current Events