It’s good to know that the status of #SlowInternetPH was asked to the vice presidential candidates in last Sunday’s debate. Candidates were asked how to resolve the country’s poor internet speed status and #SlowInternetPH.

I find Senator Bong-Bong Marcos’ answer the most feasible – to let other foreign ISP into the Philippine market and to empower the National Telecommunications Commission (NTC) to act on customer’s complaints.

In a press statement Saturday, the senator noted that telecommunications has made all economies a part of the global marketplace.

Marcos said the Philippines ranks among countries with the slowest and most expensive Internet services in the world.

The global average broadband download speed is 23.3 Mbps (megabytes per second) which is nearly eight times faster than the Philippines’ average download speed of just 3.64 Mbps.

“How are we supposed to conduct business on this basis? You and I all know that when it comes to a point where there is no Wi-Fi, we don’t quite know what to do with ourselves because we have to keep that line of communication going,” Marcos said.

“It’s simply something that we have not paid attention to and it is something that is weakening the ability of our businessmen to conduct business in this global marketplace,” he added.

He said the technologies exist, the skills that are required exist, and it is just a question of taking on the policy and the concept that this is important and an essential service.

“It’s not a luxury, it’s not for fun because this is the way that business is conducted in this day and age,” Marcos said

Before, when the first infographics showing that the Philippines is 2nd to the lowest in Asia when it comes to Internet speed, it was Senator Bam Aquino who rallied and spearheaded the Senate Hearing about #SlowInternetPH but nothing happened. He’s now busy with the recent money laundering scandal.

Now, I have high hopes for Senator Bong-Bong Marcos that he can do something about the poor status of Internet speed in the country. In fact, I’m only asking two things from whoever wins the Presidential and Vice-Presidential elections – solution to traffic in Metro Manila and solution to #SlowInternetPH.

It reminds me of my current complaint at the NTC versus my ISP Globelines over capping issues without my knowledge but that’s another story. My hearing is set next week and hopefully we’ll have a settlement that is acceptable to both parties.

Going back to the status of #SlowInternetPH, I hope that both the President and Vice-President, whoever wins, will focus on this. The Filipino people are losing money due to slow, unreliable and expensive internet cost. Take a look at some of these infographics. 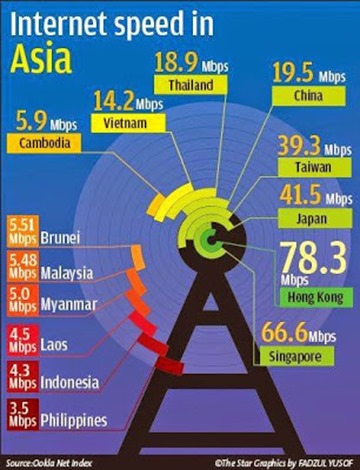 The Philippines now has the slowest Internet speed in Asia at an average of 3.5 Mbps. My Globelines plan is at 3 Mbps at P1,300.00 a month.

The Philippines is at #14 (out of 20 Asian countries) when it comes to cellular data speed at 4.2 Mbps average.