5 Reasons I Will Not Vote For Duterte

As a blogger and a Wikipedia contributor, the #1 rule I learned is to credit your source for everything you’re saying on your blog (or article) that is not your personal opinion. When you’re stating your source, it should be from a generally-accepted reliable website (.com) and not from a blog. 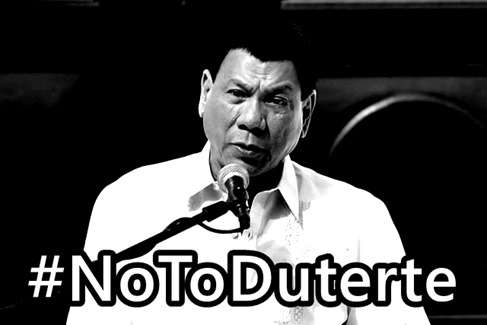 Image courtesy of The Philippine Star.

On the topic of why I’m not voting for Duterte, here are my reasons for #NoToDuterte:

He held 2 press conferences saying, he is not seeking the presidency – and yet, he filed a CoC. For me, that’s a sign of being indecisive and I will not vote for indecisive candidates.

“Ending weeks of speculation, he announced this during a press conference in Davao City on Monday afternoon, October 12. This is the second press conference he has called to confirm he is not seeking the presidency.” Source and Source.

For me, killing another human being is not acceptable for whatever reason. Even Hitler deserves to be in prison to reflect on his crimes. I believe every criminal has the right to repent. I still believe in our current criminal justice system. There is no Death Penalty in our law.

Duterte, by the way, admitted to these killings. Source

“His strongman approach was criticized by no less than the Commission on Human Rights (CHR) and other human rights advocates as a form of vigilante justice”. Source

This is the best quote that describes his character, as a person:

“The court cited the results of an examination by a clinical psychologist who found Rodrigo unable to “remain committed to a person or a relationship.” He carries a “gross indifference to others’ needs and feelings, heightened by lack of capacity for remorse and guilt.” Source

Even before Duterte became mayor, his father Vicente Duterte (died in 1988) served as Davao Provincial Governor from 1959 to 1965. Source

“Digong is among the country’s longest-serving mayors. He has been Davao City mayor for 7 terms, totalling more than 22 years. When not a mayor, he was vice mayor under his daughter, Sara, or congressman.” Source

According to Google, it is the world's largest database of user contributed data about cities and countries worldwide. Sorry, but I only trust news websites.

User contributed data is similar to a popularity vote. Not necessarily from a news-worthy website like BBC, CNN, or even Inquirer. The ranking of Davao is not based on research. It’s not even based on the statistics by the Philippine National Police.

I tried Numbeo’s way of obtaining data and found out how questionable their method is. Click here.

On the other hand, I find two things I like about Duterte:

In the end, I still won’t vote for Duterte since the negative side of him surpasses the positive ones. I don’t care if majority of my Facebook friends will cast their one vote for Duterte, but mine will not be counted for him. #NoToDuterte

Technorati Tags: 5 Reasons I Will Not Vote For Duterte,Blogger,Wikipedia
at 12:32:00 PM
Email ThisBlogThis!Share to TwitterShare to FacebookShare to Pinterest
Labels: Current Events