The Flying Adventure Continues In Lubao 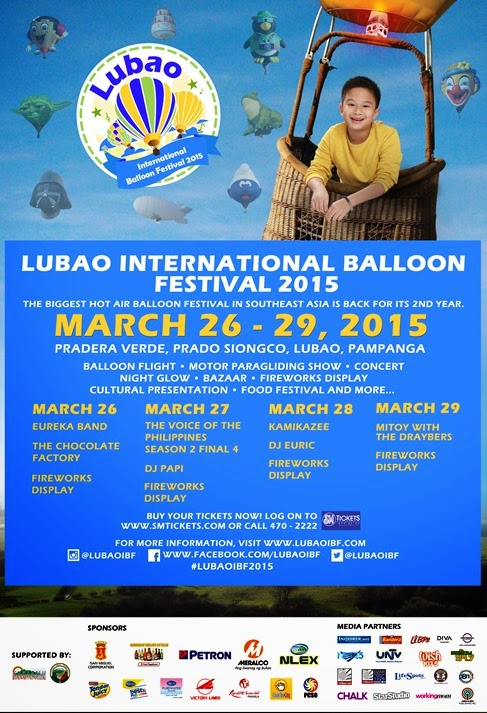 It will be the biggest annual hot air balloon festival in Southeast Asia that will feature more than forty (40) colorful hot air balloons coming from different countries all over the world, fourteen (14) of which are special shaped balloons like Darth Vader, Yoda, Humpty Dumpty and Frog.

Aside from the majestic balloons that are all set to soar, there are other activities such as cultural presentation, water balloon fight, motor paragliding, paint ball exhibition, night glow and fireworks display.

Local concessionaires will also be featured aside from carnival and kiddie activities, making LIBF 2015 a family oriented event and a great attraction for tourists.

Known celebrities and bands such as Kamikazee, Mitoy with the Draybers and The Voice of the Philippines Season 2 – Final 4 will be performing and jam with us on this four-day event.

Tickets for the festival are priced at Php250. Tickets can be purchased at SM ticket outlets located at SM Cinema area or you can visit www.smtickets.com for online purchases.

Details of the event can be checked at www.lubaoibf.com or thru our social media accounts Facebook: www.facebook.com/lubaoibf, Instagram: @lubaoibf and Twitter: @lubaoibf (use the hashtag #LubaoIBF)